Nanomedicine is simply the medical application of nanotechnologies. The idea is the involvement the use of nanoparticles to improve the behaviour of drug substances. The goal is to achieve improvement over conventional chemotherapies. Customized treatments will be required to overcome the issues raised by clinical patient and disease heterogeneity. As one might expect, the same drug will accumulate in tumors at varying concentrations in patients with different cancers. But this also happens in patients with the same kind of cancer. It has to be ensured that drug nanocarriers are really accumulating in the specific tissues to better treat patients. This brings in the necessity of a treatment prediction tool to select the patients most likely to accumulate high amounts of the nanomedicine of interest and hence benefit from nanomedicinal treatment.

Positron Emission Tomography (PET) is such a noninvasive quantitative imaging tool with excellent sensitivity and spatial/temporal resolution required at the whole-body level. Radiolabeling of liposomal nanomedicines with single-photon emission computed tomography (SPECT) radionuclides has been successfully used to study their biodistribution in preclinical and clinical studies, but SPECT imaging suffers from lower sensitivity and temporal/spatial resolution than PET. However, an ideal PET radiolabeling method viable for both preclinical and clinical imaging wasn’t explored before. Rafael T. M. de Rosales, Alberto Gabizon and colleagues at King’s College London and the Shaare Zedek Medical Center sought to address this challenge.

The following Mediso systems were used to conduct the animal imaging studies: nanoScan PET/CT and NanoSPECT/CT Silver upgrade. Both systems are equipped with the MultiCell animal handling and monitoring system, thus enabling a combined PET-CT/SPECT-CT imaging strategy. Interestingly both PET and SPECT were performed in the same animals (by moving the same bed from scanner from scanner, while the animals were anesthetized in fixed position) that allowed to image the tumour cells with SPECT and the nanomedicine with PET.

The researchers introduced a simple and efficient PET radiolabeling method exploiting the metal-chelating properties of certain drugs (e.g., bisphosphonates such as alendronate and anthracyclines such as doxorubicin) and widely used ionophores radiolabeled with long half-life metallic PET isotopes, such as 89Zr, 52Mn and 64Cu. The labels — and thus the liposomal drugs — could then be tracked using positron emission tomography (PET) to see where they go within the body. The article discusses in details the feasibility and effectiveness of their method, as well as its advantages and limitations, and show its utility for detecting and quantifying the biodistribution of a liposomal nanomedicine containing an aminobisphosphonate in vivo. 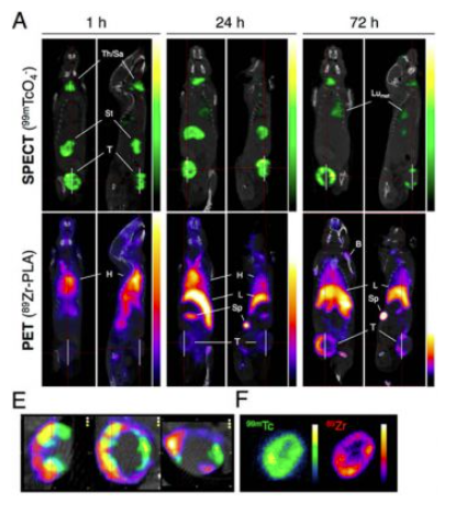 In a model of metastatic breast cancer, the researchers demonstrated that their technique allows quantification of the biodistribution of a radiolabeled stealth liposomal nanomedicine. Alendronate (ALD), an aminobisphosphonate, was selected as the radionuclide-binding drug of choice to develop this method for two reasons: (i) known ability to act as metal chelator to form inert coordination complexes with zirconium, copper, and manganese; and (ii) demonstrated anticancer activity and γ−δ T-cell immunotherapy sensitizing properties. The used liposomal formulation is referred to as PLA in the article.

The biodistribution of the radiolabeled liposomes was monitored using PET imaging with 89Zr-PLA in a metastatic mammary carcinoma mouse model established in immunocompromised NSG mice. This cancer model is also traceable by SPECT imaging/fluorescence due to a dual-modality reporter gene, the human sodium iodide symporter (hNIS-tagRFP), that allows sensitive detection of viable cancer tissues (primary tumor and metastases) using SPECT imaging with 99mTc-pertechnetate and fluorescence during dissection and histological studies. The imaging protocol was as follows: first, mice were injected with 89Zr-PLA (4.6 ± 0.4 MBq) at t = 0 followed by nanoScan PET/CT imaging (liposome biodistribution). The same mice were then injected with 99mTc-pertechnetate (30 MBq) and imaged by SPECT-CT. The SPECT injection was repeated at t = 24 h, 72 h, and 168 h. It was confirmed by separate phantom studies that the presence of 99mTc was not affecting the quality/quantification of the PET study. CT images revealed a significant increase in tumor volume during the imaging study. Using the tumor volumes from SPECT and CT, the researchers calculated the percentage of necrotic tumor tissue over time, by subtracting the hNIS-positive volume (SPECT) to the total tumor volume (CT). A PET-CT study was also performed using 64Cu-PLA in an ovarian cancer model (SKOV-3/SCID-Beige) over 48 h to test the versatility and capability of the radiolabeling method.

The common MultiCell animal handling and monitoring system (developed by Mediso) on both imaging systems gave the possibility to easily co-register the PET/CT, SPECT/CT and PET/SPECT studies as the animals were moved in co-registered position between the systems.

MIP video (3D, rotating along z-axis) showing co-registration of PET (red signal, 89Zr-PLA) and SPECT (green signal, 99mTcO4-, hNIS positive viable tumour tissue) of representative tumor from the mutimodal PET/SPECT study in the 3E.Δ.NT/NSG model. Both signals/radiotracers accumulate predominantly at the rim of the tumour and areas of low colocalization as well as high co-localization (yellow) are evident.

Imaging with PET in mouse models of breast and ovarian cancer showed the drugs accumulated in tumors and metastatic tissues in varying concentrations and at levels well above those in normal tissues, the researchers report. In one mouse strain, the nanomedicines unexpectedly showed up in uteruses, a result that wouldn’t have been detected without conducting the imaging study, according to the researchers.