Glioblastoma multiforme (GBM) is the most common primary tumors of the central nervous system. The survival rate for patients with GBM is dramatically low compared to patients with other brain tumor types. An important aspect contributing to this poor outcome is the genetic heterogeneity of GBM, which translates into heterogeneous expression patterns of potentially druggable targets. Hence the understanding of how spatiotemporal patterns evolve and change during pathogenesis would help to develop new targeted therapies, and biomarkers for treatment response.

The sigma-1 receptor (sig1R), an endoplasmic reticulum chaperone protein, is involved in signaling pathways assumed to control the proliferation of cancer cells and thus could serve as candidate for molecular characterization of GBM. The authors have used a selective sig1R ligand (S)-(−)-[18F]fluspidine to test this hypothesis with PET noninvasive molecular imaging.

In conclusion, the data obtained in the U87-MG mouse model of GBM along with the detection of sig1R in human GBM tissue for the first time by a PET radioligand, indicate not only the relevance of this target but also the suitability of (S)-(−)-[18F]fluspidine for sig1R-targeted cancer research and drug development. 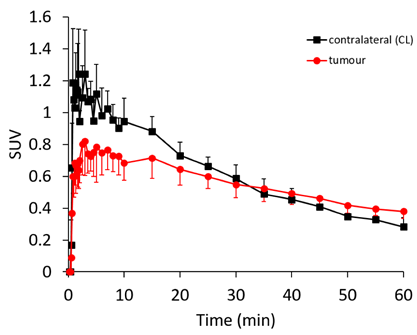