Early diagnosis and therapy are crucial to control disease progression optimally and achieve a good prognosis in rheumatoid arthritis (RA). Moreover, therapeutic intervention should start as soon as the diagnosis has been established, with the aim of stopping inflammation before irreversible damage is caused, but unfortunately current diagnostic methods are still not very sensitive and specific to RA.

Early hallmark of RA is the increased number of activated macrophages in the synovium with strong increase of their translocator protein (TSPO) level.

In previous studies a 99mtechnetium-labeled TSPO ligand (99mTc-CB256) was used to image a TSPO-rich cancer cell in vitro; however, few 99mTc-CB256 in vivo evaluation has been reported so far probably due to the cytotoxicity of CB256 (75 times more than analogous CB86). Here, a novel TSPO targeting radiopharmaceutical consisting of CB86 and diethylenetriaminepentaacetic acid (DTPA) is described. 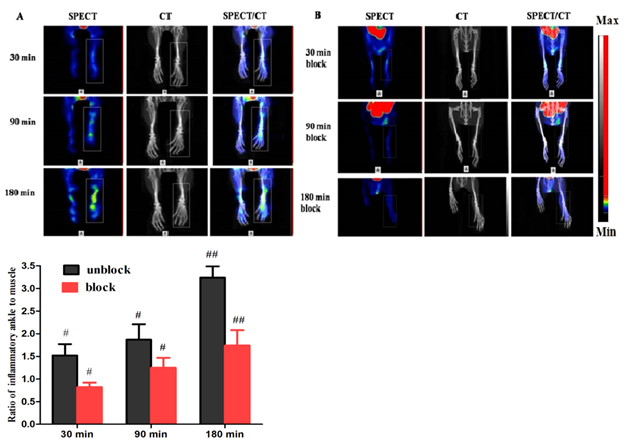