Regulatory T cells (Tregs) have gained important role in mechanisms of transplantation tolerance and graft survival due to their putative capability to control immune responses. They can prolong the survival of allografts when they are administered after their purification from blood and further manipulated in vitro.

Despite an increase in the number of clinical trials using Treg therapy, important questions remain unclear such as their in vivo biodistribution over couple of weeks.

The aim of the present study was to investigate their long-term (for up to 40 days) biodistribution in vivo by SPECT imaging in mice bearing human skin transplants. As long-term tracking is challenging if radioactive dose has to be minimized, transplanted mice received genetically modified human Treg cells: they were lentivirally transduced with the human sodium iodide symporter (hNIS) and for the imaging, its alternative substrate, pertechnetate (99mTcO4¯) was injected iv. on the days of the scan. In one group of mice Gr-1+ cells (including neutrophils and certain monocytes) were depleted using an antibody raised against Gr-1 to achieve a high level of immunocompromise.

Results show that 99mTcO4¯ uptake was elevated much earlier in the presence of Gr-1+ cells, suggesting their active, accelerating role in influencing Treg recruitment to the graft.

For SPECT/CT imaging 20 MBq 99mTcO4¯ was administered iv. and SPECT scans were acquired 40 min later with nanoScan SPECT/CT. Data were reconstructed using Tera-Tomo with corrections for attenuation, detector dead time, and radioisotope decay in place as needed. CT images were used to draw ROIs and provide the volumes required for standard uptake value calculations. The total activity in the whole animal (excluding the tail) at the time of tracer administration was defined as the injected dose (ID). 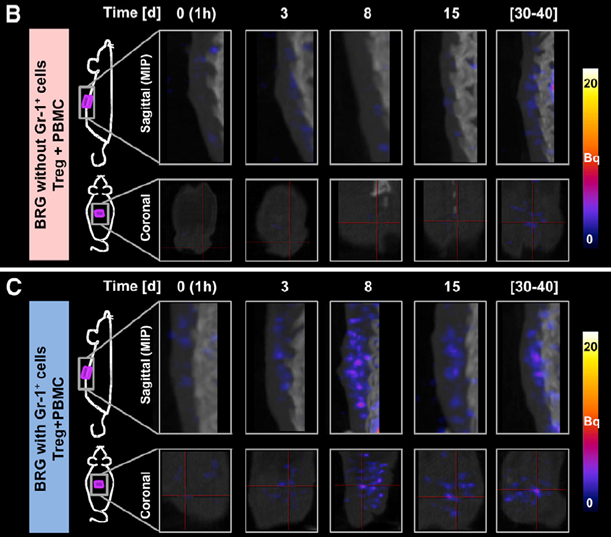