Brown adipose tissue (BAT) is specialized in energy expenditure, making it a potential target for anti-obesity therapies. However current BAT therapies based on cold exposure or B-adrenergic agonists are clinically not feasible, therefore alternative strategies has to be explored for developing new therapy possibilities. The researchers showed that adenosine activates human and murine brown adipocytes at low nanomolar concentrations. and induces browning of WAT. In the light of the world-wide obesity pandemic, activators of BAT may be potential drug targets for anti-obesity therapies and as shown here, adenosine is a previously unappreciated activator of BAT.

Adenosine is released in BAT during stimulation of sympathetic nerves as well as from brown adipocytes. Pharmacological blockade or genetic loss of A receptors in mice caused a decrease in BAT-dependent thermogenesis, whereas treatment with A2A agonists significantly increases energy expenditure. Moreover, pharmacological stimulation of A2A receptors or injection of lentiviral vectors expressing the A receptor into white fat induced brown-like cells—so-called beige adipocytes. Importantly, mice fed a high-fat diet and treated with an A agonist are leaner with improved glucose tolerance.

The detailed analysis required a suitable animal model that mimics the response of human BAT to adenosine. The in vivo imaging results validated the original hypothesis that adenosine receptors' agonist ligands really activate the activities of brown adipose tissue.

The PET/MRI studies of BAT activation were performed on nanoScan PET/MRI (Mediso Medical Imaging Systems, Hungary) using male anaesthetized C57BL/6 WTmice. Subcutaneous injection of vehicle, noradrenaline or PSB-0777 (the A2A agonist) (both 1 mg per kg body weight) was performed one minute before intraperitoneal injection of 14.7+/-0.4 MBq of [18F]FDG. The activity in the interscapular BAT region at 75 min post injection was expressed as mean standardized uptake value. 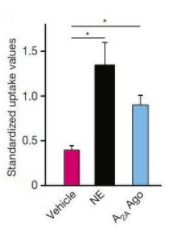